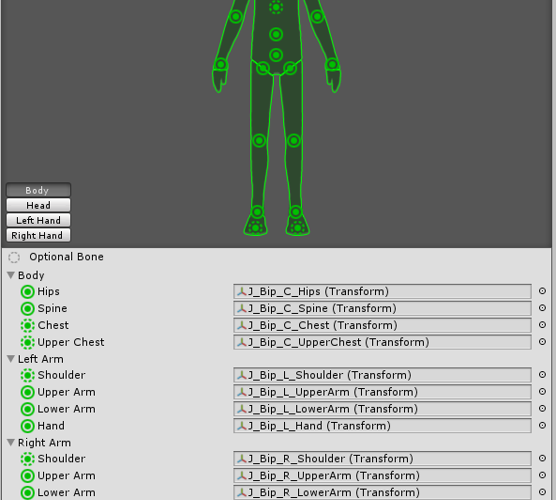 There are three animation types in Unity.

Legacy….An old animation system where the bone name and the animation name correspond to each other.
Generic….This is used to create an animation with a correspondence between a bone name and an animation name. Genetic….The name of the bone and the name of the animation correspond to each other. Mechanim support
Generic….This is a standard for using human-like animations, which allows you to use the same Humanoid model for different models by setting up bones on Unity.
Mecanim allows for animated retargeting and state machines. More details here.

The following is a description of the Humanoid type.

Humanoid is one of the standards for moving models in Unity. Each model bone has its own settings as shown in the following figure.

The advantage of this approach is that you can avoid the differences in model bones and names of the bones by matching the model’s bones to the type of the Humanoid type.
Head Nod Down-Up” and “Animator.Head Tilt Left-Right” properties are registered when you create a Humanoid animation. Since the animation value is set in the range of -1≦x≦+1, I think the animation is moving by quaternions or something like that, but it’s not a quaternion, it’s registered as a “Muscle value”. It sets the range of motion that each bone can move, like the range of motion of a bone (reference: human skeletal range of motion). Animator.Head Tilt Left-Right” normalizes the range of motion of the neck, -40≦Rotation value Z≦40 to -1≦z≦1. So, for example, if Animator.Head Tilt Left-Right=0.5, z=20. As you can see, each b-zone has a specific range of motion, so just because the value is 0.5 does not mean the value is the same. By normalizing in this way, it is thought that we are trying to eliminate impossible rotation of the human skeleton. Since it will be moved within a predetermined range, the finger animation will prevent penetration.
Another value, such as Animator.Left Sholder Front-Back, causes the Hip to rotate as the shoulders move, which is set to be a natural movement.

Using Animation Converter, you can convert the converted animations from Humanoid to Generic type animations, so you can use them in other models. I think the best way to create Humanoid animations is to use Very Animation. Also, if you want to edit multiple models or camera animations, you need to use Scene Timeline to preview and edit them.

Personally, I can summarize the advantages and disadvantages of using Humanoid as follows.

○Advantages
・By changing the model to Humanoid, you can change the model and still be animated.
・Since the range of motion of the bones is fixed, there is less chance of unnatural movement.
・The bones move together, making it easy to create natural movements.
○Disadvantages
・It is necessary to convert and set up animations to Humanoid type.
・It is difficult to understand the value of Humanoid’s animation.

Lastly, I know this is not related to Humanoid, but when I edit the unity animation “.anim” with Humanoid, it’s difficult to use intuitive values.